One Hundred I Love You’s 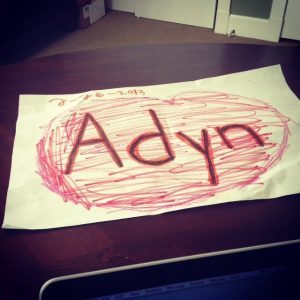 He left it on my desk, right before he walked out the door for school. A large, 11 x 17 creation with the four letters of his name carved in red and black marker. His way of saying, “I’m here. Don’t forget about me.” It’s been well over a year since he joined our family. Within a month of his arrival, we nicknamed him “Radar.” Because from the moment he wakes up until his head hits the pillow at night, he’s pinging the world with constant reminders that he exists.

Some days he does this by following me from room to room, afraid to let me leave his sight. Other days he says “I love you” a hundred times, ping after ping from a 5-year-old desperate for a hundred “I love you’s” in return.

Other days his radar pings aren’t so sweet, like the time he punched the kid on the playground and shoved his sister off the sidewalk. Or the stranger he wrapped himself around because he needed a hug. Or the many days when the sound of his tantrums fills our home. When his need grows desperate, his pings turn into screams and tears.

It’s been a struggle for me, his never-assuaged neediness. I understand the hurt behind it, the attachment wounds that fuel his fear and insecurity. But the depth of his void also overwhelms me. I’m entirely unable to fill it. He is a black hole that swallows up all of the love and reassurance I offer. I pour and I pour, but still he comes up empty, starving for more.

Even so, I say a hundred “I love you’s,” and pray, pray, pray the God who sees his presence in this world will somehow help him heal.

Today, as I look as his name on my desk in kindergarten script, I realize how very much like all of us he is. We, too, have fearsome black holes in need of filling. We, too, ping the world with our presence, asking for reassurance that we matter.

Some days it looks like too many hours on Facebook or a nagging negative attitude. But sometimes our radar pings aren’t so pretty. Hiding a deep hole, we scream and pout and throw tantrums of adult-sized portions. We complain, criticize, accuse, overreact, blame, gossip and throw ourselves at near strangers asking them to follow us, friend us, and value our life’s work. Behind the meltdown, our need is the same:

But a thousand radar pings aren’t going to fill our void. It might afford us a few quick affirmations or momentary sympathies. But our black hole of need will eventually swallow up even the best attempts to make us feel loved. And, before long, the world wearies of pouring into someone who never seems to fill.

To know we matter comes from within, not without. It’s not an external filling, but an internal confidence. My value, your value isn’t subject to a public vote. It’s not based on that painful criticism you received or the long history of mistakes you’ve made.

It’s not based on anything you do, but the fact that you are.

“I have engraved you on the palm of my hand,” God says. He tattoos your existence in this world—your name—on his very self. No need to remind him of your presence. No fear He’ll ever forget.

This is the solid mooring for all the other fillings. When we know our worth and secure our lives on that truth, a hundred offered “I love you’s” don’t disappear into the dark abyss. They simply add to what the One who made us already said is true. And—finally, against all odds—we find ourselves full.

Someday my little boy will get this. Someday he’ll understand that all the wounds of the world can not wipe away the four letters of his name inscribed on a Father’s hand.

Until then, I’ll whisper a hundred “I love you’s.” And make sure he knows about the One who means those sweet words the very most of all.

Do you ever find yourself pinging the world for reassurance? How do you recapture a sense of security and confidence?