The Power of a Whoop and Holler 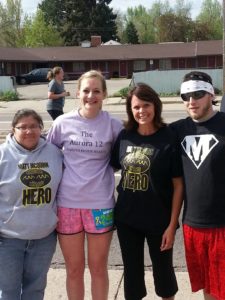 I’ve never thought of myself as the cheerleader type. Itty-bitty skirts and pom-poms? Um, like, no thanks. I stood at mile marker 9, as runner after runner passed me by. The half-marathon had started at 7 am—13.1 miles through Denver. Only forty-five minutes after the pop of the gun, the first elite runner passed my post. I watched in awe, marveled at his incredible speed and strength. If he saw me at all, he didn’t show it. His focus was solely on the goal.

Soon, the handful of elite athletes gave way to the thousands of men and women of various sizes, shapes and ages who came out to run two to three hours for fun.

I’d considered running this race myself, my second half-marathon. But time constraints made it impossible to train. And I knew this wasn’t a race to run without preparation.

But then my friend, Jerri, contacted me. Her son, Matt McQuinn, died in the Aurora Theatre shooting July 2012. Jerri had heard about Amanda, a survivor, who planned to run the race in honor of the victims: one mile for each life lost, the last mile for all the families left behind. Her fiance had been one of the twelve. This race was her way back to life, even in the loss.

So Jerri asked: “Would you run Mile 10 with Amanda? Represent Matt and the family?”

Yes, absolutely. So Sunday morning, I stood at mile marker 9 along with Matt’s brother, Eric, to wait for Amanda and our 1-mile run together.

But I didn’t anticipate what would overcome me while we waited:

Goosebump-raising, misty-eye-making inspiration. Unlike the elite leading the pack, the vast majority of runners agonized with each step. Sweat dripped off their bodies, faces red and strained from exertion. I knew how difficult the tenth mile of a thirteen-mile race could be. You’re far enough from the beginning to be utterly exhausted. And still too far from the finish to be energized by its draw. Still, they kept running, determined to finish. Inspired, I started to cheer:

“Way to go! You’re doing great! Nine miles. NINE! Can you believe it? What an accomplishment! You’ve got this! You’re almost there! Keep going!”

Goosebumps. Covering my arms. Because as I whooped and hollered like a teenage girl on the pom squad, I experienced two unexpected changes:

One, the runners cheered. Not every runner acknowledged my loud self on the sidelines. But those who did, smiled and picked up their pace. It was as if an exchange was made: the enthusiasm and confidence of a stranger passed to the weary and worn runner. A few even cheered right back at me.

And two, the cheerleader wanted to run. There’s something about cheering for someone else that makes a bleacher seat less than satisfying. The more I cheered, the more I wanted to run. It wasn’t enough to watch from the sidelines. I wanted to be in the race, with them.

Every day you and I encounter people weary of their race. Neighbors. Grocery store checkers. Moms at the bus stop. Mail carriers. Co-workers. DMV employees (yep, especially them). Ordinary people running a long and grueling race, who simply need to hear that someone sees and believes they have what it takes.

Unfortunately, we’re usually so consumed with our own race we fail to stop and see another’s.

But what if you took a minute to cheer? What if we stopped just long enough to say …

Way to go! What an accomplishment! You’ve got this! You’re almost there! Keep going!

Some will ignore your offering. Caught up in their circumstances, they won’t notice or care. But others will turn, smile, and find new strength to keep going. For them, your well-timed words just might change their race.

Either way, I bet it’ll change yours.

Because when you cheer for someone else, you run a better race yourself.

Have you run a race and experienced the encouragement of a cheerleader? Who needs to hear you cheer today?