In Search of the Happiest Place on Earth 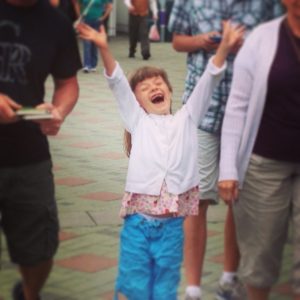 Happiness is seldom found where you think. With a look, I knew he was moments from disaster. Sandwiched between a group of rambunctious teenagers and a snaking line of strangers, my 6-year-old boy squatted on the cement and thrust two tiny fingers in his ears. He couldn’t take the stimulation, the inescapable noise. But where does a mama take an overwhelmed child in the middle of Disneyland?

The entire day had been a surprise. We awoke early, dressed, ate breakfast and packed the car.

Without argument, they smiled at the prospect of family time. They didn’t need a theme park to be thankful.

While I distracted the littles with videos on my iPhone, my husband drove to our “walk” location, passing enormous Mickey billboards, hundreds of excited tourists, and street signs directing to “Disneyland.” By some miracle, we made it to the parking garage without revelation.

It wasn’t until we got off the tram that light began to dawn. Ticket counters. Pictures of Mickey and Minnie. A castle. A big, beautiful castle. There, steps away from entry,  three children who never dreamed they’d one day go to Disneyland discovered they were doing just that.

After six hours, however, reality caught up with the magic. Tired feet. Sticky hands. Hungry tummies. Too much noise. Too much to-do. Exhaustion. And the six-year-old who ran excited circles outside the gate, now crouched on the pavement desperate to escape.

I’ve always loved Disneyland. Maybe it’s the fact I was born minutes away. Or maybe it’s my infatuation with fairies and stories and flowing princess dresses.

But now, as an adult, the idea of Disneyland irks me just a bit. Not Disneyland itself, with its whimsy and enchantment. But their utterly impossible claim:

“The Happiest Place on Earth.”

It’s a fabulous marketing gimmick, I’ll give you that. And the park’s 85 acres certainly provide an unparallelled experience and plenty of reasons to smile.

But no one can deliver another’s happiness. Not even with a $92 ticket.

Of course, we try. We search far and wide for the happiest place on earth. Pursuing a particular relationship. Nailing the ideal job. Squeezing into the right-sized jeans. Trust me—I know. In elementary school, I searched for my happy in straight A’s. In college, a worthy degree. In young adulthood, the right clothes. In my 20’s, Prince Charming and marriage. Then, children. So very many children. But like cotton candy in a kid’s mouth, the happy evaporated the moment I reached for it.

Why? Because no matter how wonderful all these things are, no amount of costumes, characters or props can create a happy place.

The happiest place on earth isn’t a place at all. It’s the ability to find the magic in an ordinary, imperfect life.

For me, last week, my happy place came in the middle of a six-year-old meltdown. As strangers gawked, my husband picked up our overwhelmed boy and took him to the side. For 10 minutes I marveled as I watched a loving father talk a triggered little boy off the ledge. Patience. Tenderness. Reassurance.

Was it a perfect day? No. But for us, it was everything we hoped it to be and more.

I don’t know your story or what you’re facing. But I assure you the happiest place on earth isn’t “out there” somewhere. You don’t have to lose ten pounds or find a man or buy a $92 ticket to Disneyland. You’re already living in the middle of it.

Don’t miss the magic in the middle of it.

Where can you look for the magic in your ordinary life today?