In Search of a Good Memoir {UPDATED} 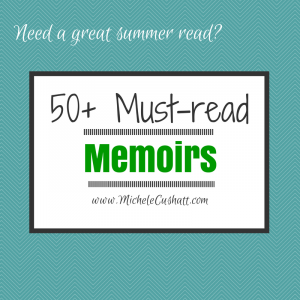 I love a good memoir.

mem·oir
ˈmemˌwär,-ˌwôr/
noun
(1) a historical account or biography written from personal knowledge or special sources.
(2) An essay on a learned subject.

Well-written, page-turning stories of real people doing real life. I’ve always been a fiction reader. Novels comprise 75% of my reading material. But memoir (when done well) is NON-FICTION fiction. Compelling slivers of honest life written in the form and shape of a gripping novel. A story delivered via the medium of truth. Powerful.

Often—especially during the summer months— I hear from readers who want book recommends. So, in the event you might be a memoir-lover too, I compiled this list in 2012 and updated it this week. Many I’ve already read (I *starred* those). Other still occupy my lengthy to-be-read list. Although I can’t vouch for each one, and memoir style and taste can vary as much as an individual’s dinner palate, I can say each came at the recommend of someone I know and respect.

Thought of one I missed? Leave the title it in the comments. I’ll keep the list growing.

Have you read an excellent memoir that’s not included on this list? Leave it in the comments.