A Worship That Costs Everything 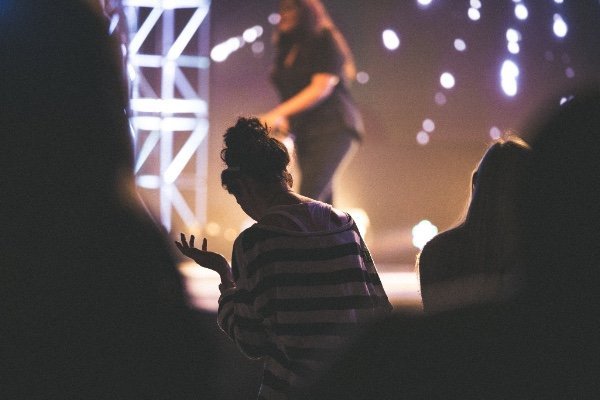 I sat in the fourth row from the front, right hand side of the center aisle. The lights of the church’s worship center had been dimmed while white-hot spot lights flooded a stage filled with musicians.

There was a time I’d been one of them, not all that long ago. A pianist and vocalist, often the worship leader or soloist.

But not today. Not anymore.

I felt the familiar sting with the memory, but pushed it back down, like packing up last night’s leftovers in Tupperware.

Nope, don’t go there, I chided myself. Not today.

I tapped into my trademark self-control, keeping all the hard emotions clean and neat. This was a time meant for worship, for focusing attention on God and his goodness. Not a time to rehearse regrets and nurse losses.

Pull yourself together, Michele. You’re in public.

The worship leader strummed the polished guitar slung over his shoulder, playing a tune I recognized within the first few bars. It was a favorite, one of those songs whose lyrics always stirred my soul and lifted me toward heaven and the promise of something greater.

When the leader sang the first words, I joined him, along with nearly a thousand other men, women and children gathered in the dark. Faces turned toward the light, we poured out our hearts in hope and praise.

But this time the familiar song and the sound of my own voice obliterated my prior resolve. I stopped singing, unable—unwilling?—to continue. The familiar tune didn’t inspire; it wounded. In the moment, the promise of heaven wasn’t enough. I wanted more.

I wanted my voice back.

To be able to sing. Like before. But there was no faking it, no pretending otherwise. Most days, I accepted my new voice—or lack thereof. But every now and then, the stark truth struck me in the face once again, surprising me with its force.

My brain still knew how to sing, how to get vocal cords and tongue to form words and notes. But what my head knew my body could no longer do. Notes I’d once mastered were now out of reach. Words that I’d once articulated without effort were now impossible to form.

Simply, singing no longer brought me joy. Not only had cancer cost me my tongue, but the radiation had burned my throat and vocal cords. Now singing came with a cost, a very real physical cost. And that physical cost came packaged with a potent emotional one. I’d never get my old voice back.

Forever is a long, long time.

So how does a music-loving girl offer up worship songs when she no longer can sing?

I imagine there are more than a few of you who wince at my words. You know this kind of loss, the kind that dramatically reshapes your life, that makes Sunday morning worship songs a little less easy to sing.

Those who wanted nothing more than a happy marriage but instead ended up alone.

Those who dreamed of having children only to lose them through death or poor decisions.

Those who grew up with an innocent belief in a good God but now wrestle with doubt and questions and a fragile faith.

Those whose bodies don’t cooperate, jobs don’t pan out, and families don’t behave.

It hurts, doesn’t it? The pain won’t be ignored. There aren’t Tupperware containers big enough to contain both the losses and questions. And although you and I can deny it for a day or two, sooner or later the truth interrupts your worship. And you’re not sure you can fake it anymore.

I understand. Lately, my well-packaged emotions have been spilling out, hijacking me at unexpected times. It’s messy, ugly, and at times I wrestle against worship.

But then I remember the Widow’s Offering.

You can read the story yourself, but the short of it is this: In church filled with arm-raising worshippers offering their extravagant gifts, a poor widow came with only two copper coins. It was worth next to nothing, but it was all she had left. I imagine life’s losses had stripped her bare. It had to sting, both the letting go and the humiliation of it.

Even so, Jesus saw.

Perhaps the most beautiful worship is the kind that springs from losses. The songs we lift while weeping, the offerings that sting in the giving. I like to think these are the songs that touch the heart of the Savior. Not because He savors our pain, but because He alone knows the kind love that would endure it.

The kind of love that would would walk through hell to deliver heaven.

I’ll be honest. I still spend a good deal of time longing for what I once had. Daily pain and struggle won’t let me forget my losses. It hurts to remember. And it hurts to try and forget. I’m trapped between what once was and what is. And, at times, when I’m standing in a beautiful church building surrounded by smiling, seemingly unaffected worshippers, I want to sink into my grief and questions, and cling to the little I have left. Haven’t I sacrificed enough?

But then I remember the Garden. The Cross. And a Jesus who is tender toward those who give it all in spite of the pain.

I still weep when I worship some days. I still wish for a voice that didn’t crack and hurt when I raise it to the rafters. There’s a good chance the people standing in front of me wish the same.

Even so, I will keep singing. Even as I struggle and wrestle with questions I can’t answer. Not because I’m noble or strong or super spiritual. Not even close.

I will sing because He’s all I have left. And my poor woman’s song is my worship.

[reminder]How about you? Is there a loss you can turn into uncommon worship? Jesus sees you, friend. He sees. [/reminder]